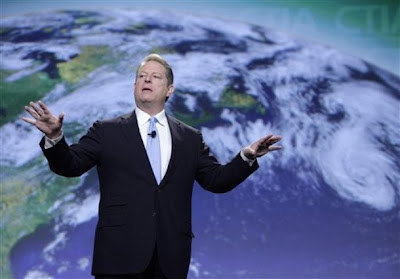 FROM-Pajamas Media
Roger Kimball
Admit it: you can’t think of Al Gore any more without tittering, can you? Even some Apple shareholders are disgusted with the former VP turned eco-nut moneybags. He’s become “a laughing stock,” declaimed one disgusted shareholder, and no wonder.

True, Al Gore has positively cleaned up by exploiting the business opportunities that have come his way from the Chruch of Gaia, I’m Greener-than-thou, Inc. The London Telegraph describes him as our “first carbon billionaire.” “There’s gold in them there faked studies, pardner!” Gore’s successful gaming of the system argues for a certain cunning and eye for the main chance. The guy has hauled in an impressive pile of pelf these last few years.

But that success says nothing about his sanity. Alas, the chap is clearly bonkers. I submit as exhibit A the interminable Op-Ed column that his PR-firm, a.k.a. the New York Times, issued today. Here’s the first paragraph:

It would be an enormous relief if the recent attacks on the science of
global warming actually indicated that we do not face an unimaginable calamity
requiring large-scale, preventive measures to protect human civilization as we
know it.

Yes, but the part to pay special attention to, of course, is the bit about “Large-scale, preventive measures,” i.e., the heavy, heavy hand of government bursting in to tax and regulate the U.S. economy to death. That’s the goal — or, rather, the goal is putting the government in charge against what Gore later calls “market triumphalism, i.e, the free, you know, market — while various energy enterprises in which Al Gore just happens to have a stake get the red carpet treatment.

A nice question: does Al Gore actually believe the rubbish he spouts? Or is it merely opportunism on the march? I don’t know, but if I were a betting man, I’d say that he has successfully melded credulity and opportunism in to one bloviating whole. Never mind the fact — that’s “fact,” Kemo Sabe, as in “what is actually the case, no foolin’” — never mind that the entire Climate Hysteria Industry is in full-scale retreat since the East Anglia University fraud was revealed last year. Phil Jones will not, repeat not, be attending any environmental rallies until further notice.
It is just lovely that the New York Times — the world’s most discredited newspaper — would give so thoroughly discredited a mountebank this lavish soapbox upon which to make a fool of himself. Next stop, Hyde Park Corner — or maybe a padded cell.