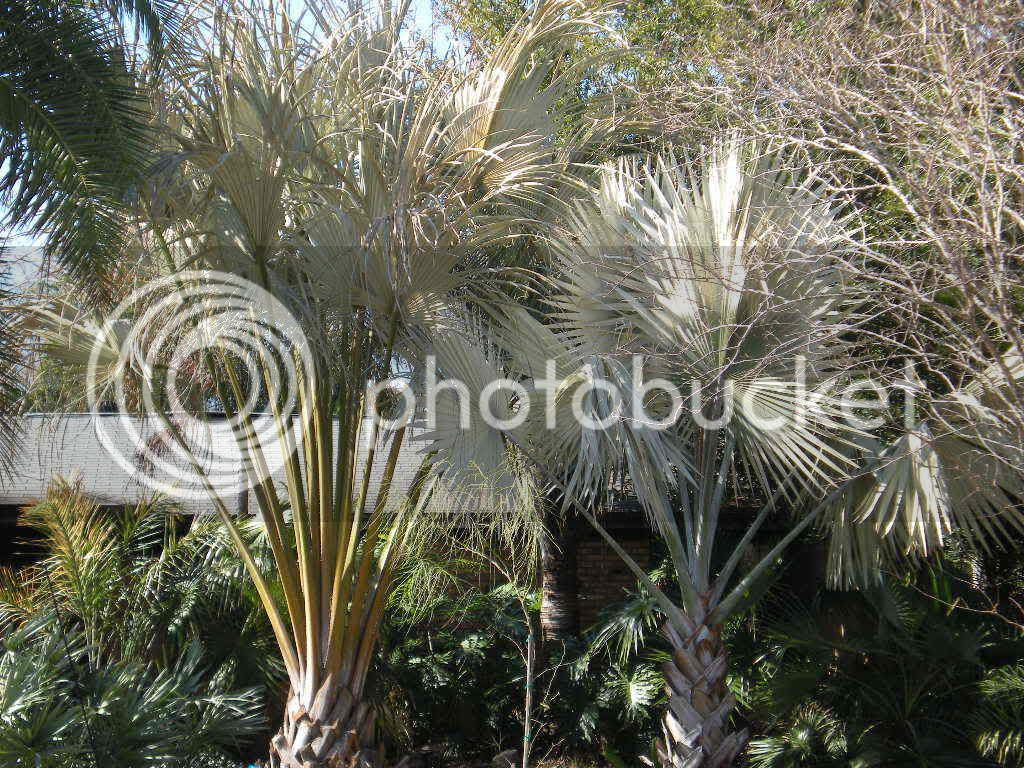 One of the pleasures of living on the Treasure Coast of Florida is the landscaping possibilities. Being in a subtropical climate you can grow many varieties of plants and enjoy them year round.

When we built our new house two years ago we looked forward to landscaping our property with tropical foliage, hibiscus,oleanders,bougainvilleas, and of course palm trees. Thanks to the "enhanced greenhouse effect" this winter our lush tropical foliage can be best described as-DEAD.

This would not greatly upset me as it gives us the opportunity to replace our wimpy tropical plants with hardier stock, more in keeping with our changing climate. The only truly heartbreaking development in this winter of our discontent is the palm trees we planted when we moved in. One in the back yard, the other the center piece of our landscaping in the front of our house. It had grown so full an beautifully proportioned that at Christmas I decked it out with lights. Now all the fronds are dead, frozen into brown sagging heartbreak every time I drive up to my house.

I am not alone, the entire neighborhood, town, county indeed much of the state is filled with once lush vegetation turned brown, not by global warming induced drought but by days of unusual freezing temperatures in the "Sunshine State."

It is not just the vegetation that has taken a hit, animal life unaccustomed to the cold has suffered as well. I'm sure many have heard of the falling iguanas

Record lows across South Florida are literally freezing the invasive iguana in its tracks.

Kamikaze iguanas, plummeting from their treetop perches, have long been a Floridian urban legend. On Wednesday morning, Local 10 caught the free-falling lizard on tape.

Thousands of fish have died in freshwater and saltwater because the extended cold spell has lowered water temperature.

Waters all around Florida are about to get very stinky over the next few days as hundreds of thousands of fish killed by the extended cold weather begin to decompose and float to the surface.

From the Panhandle to the Keys, from the Gold Coast north to the First Coast, anglers and fisheries scientists venturing out into chilly bays, estuaries, rivers, canals, and even the open ocean, are finding dead and stunned fish in a wide range of sizes and species -- freshwater and saltwater. And this is just the beginning, experts say.

``It's gross. It turns your stomach,'' said Luiz Barbieri, chief of marine fisheries research at the Florida Fish and Wildlife Research Institute (FWRI) in St. Petersburg. ``The magnitude of this is unbelievable. It's really dismal and sad to see.''

Fish kills are not uncommon during winter cold snaps, but the record-setting duration of below-normal temperatures throughout the state since Jan. 1 is reminiscent of the deep freezes of 1989 and 1977.

During those episodes, the main casualties were snook, a cold-sensitive species that tends to become listless and die when water temperatures drop below 50 degrees.

But this week's big chill may have decimated populations of other species previously believed capable of escaping plummeting water temperatures.

Jerry Ault, professor of marine biology and fisheries at University of Miami's Rosenstiel School, is surprised at the number of tarpon and bonefish killed this past week. On Wednesday afternoon, Ault's research assistant Mike Larkin picked up the carcasses of more than 160 bonefish from Florida Bay in the Upper Keys. Later in the day, Stuart fishing guide Bruce Ungar brought the scientist a ``truckload'' of dead tarpon from three to 4 ½ feet long found floating near the St. Lucie Nuclear Power Plant.

``Amazingly scary,'' Ault said. ``It's hard to get a grip on the number of mortalities, but the effects will be felt for years to come.''

Scientists and anglers say that during cold snaps fish typically protect themselves by heading for deeper water -- where temperatures are more moderate than in the shallows -- to wait it out. But this extended period of frigid weather combined with brisk northerly winds pushed cold water off the flats and into the deeper channels and canals leaving fish no escape. A NOAA weather website pegged water temperatures at various sites in Florida Bay in the 40s since the weekend.....

Today I was listening to the radio and learned that one of the poster children of the "global warming" campaign had not escaped "climate change. It seems the Florida Aquarium sent people to the Keys to investigate the damage done to our coral reefs.

Florida is the home to the most extensive shallow coral reef formations in North America. From the Florida Keys to the Dry Tortugas, these coral reefs have been under increasingly destructive influences over the years to dredging, ship groundings and illegal collecting. As if that wasn’t enough of an uphill battle, the recent cold snap in January may have killed everything in waters less than 10 feet deep....

....If initial reports are true and the majority of shallow coral formation in the Keys have been wiped out, the need to propagate corals on a massive scale aren’t just important, they are essential....

I do understand the "enhanced greenhouse effect" hypothesis, how warmer temperatures will cause more moisture in the atmosphere which in turn can cause increased snow falls when it gets cold. I thought however this was to occur in the northern latitudes like well ..... Washington DC, or Philadelphia ? I had no idea however that this hypothesis had advanced so far south as to give places such as Dallas record snowfalls . I certainly had no idea climate change would drastically effect me here in sunny Florida with dead palm fronds and snook, not to mention iguana falls and dead coral reefs. It must be all that evaporation.

There can only be a couple of answers to these strange occurrences. Either "climate change" is far worse than they have told us or ALGORE has been vacationing in our state this winter.