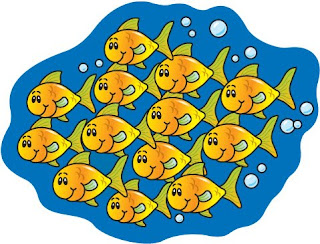 Wherein: Climate models which are nothing more than hypothesis are used to generate studies of future events, which are unmeasurable and unverifiable. Also known as CYBER WAG (Computer generated Wild Ass Guesses)

Since I have not done a Cyber Wag  alert in awhile I would suggest that that you read the above link to review.

In this particular incident the scientific community is using their vast computer power to kill off and stunt the growth of the entire fish population of planet Earth.

Fish to shrink by up to a quarter due to climate change, study reveals

After considerable wringing of hands:

Global warming is likely to shrink the size of fish by as much as a quarter in coming decades, according to a groundbreaking new study of the world's oceans.

The reduction in individual fish size will be matched by a dwindling of overall fish stocks, warned scientists, at a time when the world's growing human population is putting ever greater pressure on fisheries.

And further alarmist verbage meant to scare the unenlightened masses:

"It could be worse than that," said Prof Callum Roberts, at the University of York, who described the research as the most comprehensive to date. Roberts, who was not one of the study's authors,...


Of course it could be our friendly scientist are known for their conservatism when it comes to hyperbolic rhetoric.

"We will see dramatic changes in the oceans likely to reduce productivity," said Roberts. "One billion people rely on fish for primary animal protein and that is going to increase, especially in developing countries. We have to get to grips with our dependence on fossil fuels otherwise we are stuffed."


Oh yes of course couldn't have a scientific discussion without throwing the old fossil fuel/big oil angle into it. But to make sure everyone makes the connection our scientist point it out

"Our work shows a very concerning future for the oceans and so it is very important to reduce greenhouse gas emissions and develop better fish management policies to adapt to these changes," said Cheung.


The pertinent passage is found well down in the article and identifies it as a Cyber Wag:

Cheung's team projected temperature rises using data from the Intergovernmental Panel on Climate Change, based on a high-emissions scenario that matches the current trajectory of greenhouse gas emissions.

So as is usual they are using a hypothesis, a model, which can not be proven to make model of what will happen decades hence and using this to drive their society crushing agendas and feed their government grant coffers.

One wonders what the world would look like today if these same scientist used their talents and intellect to truly help mankind rather than to saddle it with unsustainable policies based solely on Cyber Wag fecal matter.