If you put a heater in your freezer and open the door will it snow in your kitchen?

In an earlier post I mentioned I was looking for the current scientific explanations for all the cold snowy weather the Northern Hemisphere has been suffering through for the past couple of years.

The reason it pricked my curiosity is that it seems to me that the climate science community has multiple explanations as to why the weather is behaving contrary to projections. They are being forced to theorize on the fly so to speak and in so doing making a further mockery of their position.

The now well known quotes from the The Independent article

Dr David Viner, a senior research scientist at the climatic research unit (CRU) of the University of East Anglia,within a few years winter snowfall will become "a very rare and exciting event"

"Children just aren't going to know what snow is,"...

David Parker, at the Hadley Centre for Climate Prediction and Research in Berkshire, says ultimately, British children could have only virtual experience of snow. Via the internet, they might wonder at polar scenes - or eventually "feel" virtual cold.

Heavy snow will return occasionally, says Dr Viner, but when it does we will be unprepared. "We're really going to get caught out. Snow will probably cause chaos in 20 years time," he said.

The chances are certainly now stacked against the sortof heavy snowfall in cities that inspired Impressionist painters, such as Sisley, and the 19th century poet laureate Robert Bridges, who wrote in "London Snow" of it, "stealthily and perpetually settling and loosely lying".

Which only proves that earlier in the decade scientist at the forefront of the man made global warming theory believed that what we are experiencing now was destined to become less and less frequent.

The idea that the theory of global warming would or could lead to more snow and colder temperatures was further discredited by the much discussed kerfufle over the MET office winter forecast, which among other items brought us this; 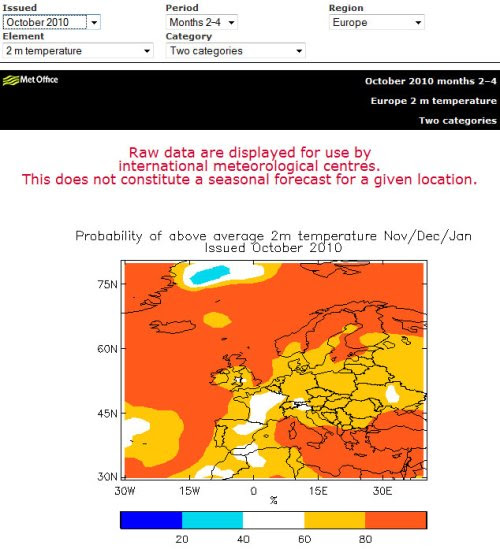 This, despite the disclaimer, shows that the models predicted above normal temperatures when in fact Northern Europe was visited by record cold and snowfall.

So what is a climate scientist to do when caught out in the cold? Scramble for an explanation. However what have we been left with are multiple explanations and new theories which attempt to explain a reality which they had not forecast.

Fortuitously for the climate science community when the bitter cold and snow again swept through Great Britain and Northern Europe this winter they were prepared with a study to explain it, using of course their revered climate models. Obviously not the same model that produced the graph above for the Met Office. But note how the abstract concludes:


We present a conceptual model that may explain the nonlinear local atmospheric response in the B-K seas region by counter play between convection over the surface heat source and baroclinic effect due to modified temperature gradients in the vicinity of the heating area.

Check out the meaning of a conceptual model, a good place might be our friends in WikiWorld

Then it snowed like all get out in the Northeast United States back in December. Not satisfied with the German's conceptual model, Judah Cohen, another climate scientist, opined in the New York Times:


As global temperatures have warmed and as Arctic sea ice has melted over the past two and a half decades, more moisture has become available to fall as snow over the continents. So the snow cover across Siberia in the fall has steadily increased.

The sun’s energy reflects off the bright white snow and escapes back out to space. As a result, the temperature cools. When snow cover is more abundant in Siberia, it creates an unusually large dome of cold air next to the mountains, and this amplifies the standing waves in the atmosphere, just as a bigger rock in a stream increases the size of the waves of water flowing by.

The increased wave energy in the air spreads both horizontally, around the Northern Hemisphere, and vertically, up into the stratosphere and down toward the earth’s surface. In response, the jet stream, instead of flowing predominantly west to east as usual, meanders more north and south. In winter, this change in flow sends warm air north from the subtropical oceans into Alaska and Greenland, but it also pushes cold air south from the Arctic on the east side of the Rockies. Meanwhile, across Eurasia, cold air from Siberia spills south into East Asia and even southwestward into Europe.

That is why the Eastern United States, Northern Europe and East Asia have experienced extraordinarily snowy and cold winters since the turn of this century. Most forecasts have failed to predict these colder winters, however, because the primary drivers in their models are the oceans, which have been warming even as winters have grown chillier. They have ignored the snow in Siberia.

So  we have the increased snowfall in Siberia which was created by the warming Arctic now cooling the atmosphere, ultimately dumping record snow falls in Brooklyn which the public labor unions use as a bargaining tool...got it?

So our guy Judah has a bit different take on this than the German conceptualizers, but they certainly are closer to reality than the Brits were back 2001. Of course they have the benefit of actually watching the snow fall.

Not wanting to be left out of the explanation game we have Dr. Mark Serreze, director of the National Snow and Ice Data Center (NSIDC). Now I believe he is sort of splitting the difference here without committing to anything specific.


“Here’s what happens and here’s what a lot of people get really screwed up on, and it’s straightforward,” Serreze told CNSNews.com. “All right, so it’s getting warmer, and what is happening is that we’re not growing as much ice in winter as we used to be, but we’re melting a heck of a lot more in the summer than we used to.

“So, now what happens is that if we look at the end of summer, end of the melt season in the Arctic—September, say, specifically September--what you find is that there’s much, much more open water than there used to be,” said Serreze. “But what has happened is because that open water is very dark it’s been absorbing a lot of solar heat through the summer."

“So you say it’s related to the ice melt. Yes, it is,” said Serreze. “But actually there’s a seasonal lag to it. It’s actually, the ice is melting in summer, exposing all this dark open ocean, picking up all this heat, and, then, autumn comes, the sun sets, that heat’s got to go back to the atmosphere, and that’s what it does. And that greatly warms up the Arctic relative to where it used to be--in other words, relative to, say, where we were 30 years ago. And what’s happening is that that is starting to change the sort of basic temperature gradients in the atmosphere that I talked about before.

“And so if you do that, the thinking is that could actually let this cold air in the Arctic kind of start to spill south,” said Serreze. “Now you say, ‘Well, hasn’t the air been warmed?’ Yes, it has, but it’s still cold air, though.

“But that’s the thinking,” Serreze explained. “The thinking is that, to put it in another way, we’ve put now a heat source in the Arctic that there didn’t used to be. And if we do that, the thinking is the atmosphere—the circulation of the atmosphere—responds to that. It feels that heating and responds to that. And one possible outcome of that is you get this sort of pattern that you’re seeing here for the last couple winters, that you’ve had cold and snowy over the eastern U.S., especially over Europe, but at the same time this extremely warm Arctic."

“I mean that’s basically it in a nutshell,” said Serreze.

Got that? Pretty straight forward right? I have a question though, If you put a heater in your freezer and open the door would it snow in your kitchen?

But the good ice doctor has more for us and in a sense probably the most honest.


“For example, the last two winters over the East have been cold and snowy,” explained Serreze.

“So what happens there? Well, what you’re looking at is some kind of change in the atmospheric circulation, that basically you’ve got this cold, Arctic air plunging down—clearly, because that’s exactly what’s happening—and that gives you a temperature contrast and that’s what gives you the storms, okay?” Serreze said.

“So this all kind of fits together,” said Serreze.

CNSNews.com asked Serreze, “I was hoping you could sort of unpack it for me in terms of: We’re linking global warming to a smaller ice cap to this air being forced … into the mid-latitudes? Is that an accurate characterization?”

“The question being asked here: Is there something about the weather that—this crazy winter weather that you’re getting here--that might be kind of forced by something?” said Serreze. “Is there something out there that’s changing, that might actually force the big-scale weather pattern to give you that cold stuff out in the Northeast? And this is where this Arctic stuff comes in, what’s happening in the Arctic comes in.”

Serreze stressed that the idea that Arctic warming was causing winter storms in the mid-latitudes was as yet a theory not a proven fact.

“Now saying this, (I’ve) got to stress here that there is no real smoking gun here yet,” he said.

“There’s some physical reasoning behind this as I’ve talked about. There’s evidence from climate models that such a thing can happen. There’s some limited observational evidence for it, okay. But no one has the answer yet, and this is very, very much in sort of a—you know, it’s cutting edge stuff.

“No one really knows for sure, and so we really need to look at this problem a lot harder and we need to see what’s, is this pattern going to continue, this funny winter pattern,” he said. “Are we going to see it next year?

“Those are the sort of questions we’re asking,” he said.

“Maybe this is a transient thing that we’re seeing,” he said. “Maybe it’s that at the state of the sea ice cover we see now, this is the response of the atmosphere. Maybe 20 years down the road, it changes. We don’t know. In other words, what I’m saying, just getting rid of more ice doesn’t mean that winters in New York City are going to become colder and snowier with time. It doesn’t necessarily mean that.”

“But it could?” CNSNews.com asked.

“Well, yeah, I mean as a scientist, of course, we're very circumspect about these sorts of things and love to couch these things in uncertainty because these are the things we damn well don’t know.”

Well I think that is becoming very obvious.