Little Children sacrificed on the alter of Climate Change 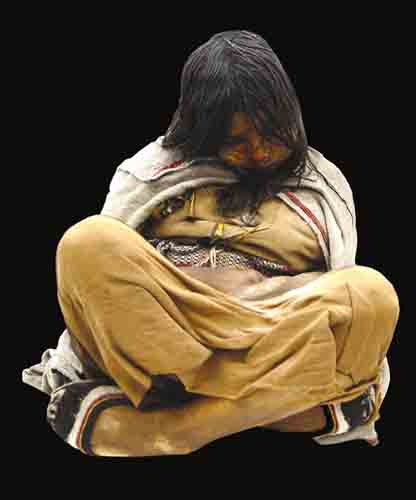 I should be used to it. but it never ceases to amaze me how the alarmist community will totally ignore truth and facts in order to promote their cause. The most recent example comes from the Tree Hugger site and an article titled Global Warming Uncovers Corpses Frozen in Time.

As usual this, like most alarmist sites, never misses an opportunity to frame a story around their agenda, facts be damned. In this case it really is a shame as the story is a fascinating one in and of itself and the author, Stephen Messenger, soils not only the story but the real scientific accomplishments behind the story. The first paragraph gives you a flavor of where the author is going:


Five hundred years ago, three Inca children were left to freeze high in the cold Argentinian Andes as a religious sacrifice. In time, their bodies mummified, having been swallowed in snow and entombed within the glacier, lost to time. But centuries later, in a warmer world, their perfectly-preserved corpses were discovered beneath the melting snow -- an increasingly common sight. Experts say that as glaciers continue to recede throughout the world, more of their long-guarded secrets will be revealed in the warm grip of a changing climate

.
As you can tell the writer is not so much interested in the mummified children as he is "the warm grip of a changing climate". The truth is that the story of the mummified children or their discovery has nothing to do with global warming. Even if it did, it would only be further proof that the past climate was as warm as it is today.

The first important detail left out of the Tree Hugger story is when the children were discovered. Reading the story (be my guest) you would be left with the impression that these children were recently found, that the "warm grip" which caused the "melting snow" in which the children were "entombed" is a new event. In fact it happened over a decade ago, in 1999. Even more telling to the propaganda aspect to the article is that the only link to a story about the children so prominently featured in the headline and the pictures is to a blog which reposts a New York Times article about the opening of the museum that was built to house the amazing archeological find. The museum opened in 2007 as was the NYT article linked by Mr. Messenger about it. So to summarize, in January 2011 Mr. Messenger writes an article referencing a museum opening in 2007 to commemorate an event which occurred in 1999, yet fails to mention any of these pertinent facts in his article but rather leads the reader to believe that this is all a current event.

You will also notice the common tactic of appealing to authority "Experts say that as glaciers continue to recede throughout the world" Of course the article he references has nothing to do with any glaciers pertinent to the mummified children rather the link is to another Tree Hugger narrative article about  Himalayan glaciers and the impact on China and India.  I know what you are thinking, surely Mr Messenger would not reference an article based on repudiated research.....you would be wrong:


The Intergovernmental Panel on Climate Change reports that Himalayan glaciers are receding rapidly and that many could melt entirely by 2035. If the giant Gangotri Glacier that supplies 70 percent of the Ganges flow during the dry season disappears, the Ganges could become a seasonal river, flowing during the rainy season but not during the summer dry season when irrigation water needs are greatest.

Yes the experts he references not only have nothing to do with the location of his main story, it is about the discredited IPCC report on the Himalayan glaciers.

Let's get back to the mummified children who were discovered in 1999. I have gone back and read many of the articles written at the time of the discovery. I have found none that reference global warming or even anything about glaciers. Most are typical of this Washington Post article which far from talking about "melting snow" describe the discovery like this:


The discovery team braved three days of driving snow and 70 mph winds at the world's highest archaeological site – the 22,000-foot peak of Argentina's Mount Llullaillaco – before they finally discovered the burial platform, which lay under five feet of rock and earth.

"At one point, we had to lower one of our workers into the pit by his ankles so he could pull the mummy out with his hands," Reinhard said.

We shall put aside the "driving snow" in the midst of "the warm grip of a changing climate" for the moment and focus on the location of the sacrificed children (in more ways than one). Far from being discovered beneath the melting snow of a receding glacier they  in fact  were "finally discovered the burial platform, which lay under five feet of rock and earth.

Had there once been a glacier which covered the burial platform? If so then it was not there when the children were placed there,... now was it?  But it is doubtful that the children were ever covered by a here again -gone again glacier. Consider this information from the April 1999 Washington Post article:


Drawn to icy mountain peaks in part because of their potential for preserving relics, Reinhard had visited the site in the 1980s and always planned to return, he said.

Far from stumbling upon some defrosting corps in the midst of a melting glacier, real scientist had spent years investigating sites then returned over a decade later to search for them.

Probably the most telling article on the initial discovery of the children which flies in the face of the narrative foisted on the readers of Tree Hugger comes from an article in US News and World Report from April 1999:


Gasping for breath in the oxygen-poor atmosphere 22,057 feet above sea level, nine archaeologists, workers, and guides spent nearly two weeks battling adverse conditions, including ferocious blizzards and 70-mph winds. For three days the team members were trapped in their tents under about 3 feet of snow, with the temperature at times 20 degrees below zero. "Even taking off my gloves to write notes was a major ordeal," expedition co-director Maria Constanza Ceruti recalled from Argentina. The altitude of the summit--only 6,971 feet lower than that of Mount Everest--can cause the brain to swell and the lungs to fill with fluid.

Johan Reinhard, primary organizer of the American-Argentine-Peruvian expedition sponsored by the National Geographic Society, had been scouting out this mountain peak since 1983 and had already brought 16 ice mummies down from other Andean summits. He knew the Incas were inclined to offer human sacrifices on the highest possible spots. "You feel like you're on the top of the world there," he said, after bringing the mummies down last week.

The weight of history. After using picks and shovels to dig through 5 feet of rock and frozen earth, the crew had to lower a graduate student into the pit by his ankles to lift the mummies out of their sanctuary.....

I know, I know, three feet of snow and 20 degrees below zero is just weather and has nothing to do with "the warm grip of a changing climate" unless of course you're in it. Regardless the fact that the children were found in a pit only confirms the fact that they were never frozen inside a glacier, at least not one that was there when they died. Further on in the article is the most telling comment on the discovery since it destroys the various narratives in the Tree Hugger story.


"Accidental" mummies have survived when nature served as an embalmer instead. The Ice Maiden Juanita--whom President Bill Clinton once jokingly said he might be tempted to ask out on a date--and the famous 5,300-year-old "Ice Man" discovered in the Italian Alps in 1991 were desiccated by exposure or repeated cycles of thawing and refreezing. The 1,000-year-old Bog People found at various sites in Northern Europe were turned to leather by the tannic acid of the peat into which they'd been cast. The newly discovered ice mummies, however, were saved from dehydration by the perpetual cold of their high-altitude burial site.(emphasis mine)

If the mummies were saved from dehydration by the "perpetual cold" the narrative of defrosting in the melting snow, is pretty much melted by the facts.

As with most alarmist narratives they are not only bad journalism, they are easily disproved by a quick search into the facts. But for the progressive mind facts are not the issue, driving the ideological narrative forward is the only goal. Giving cover for the talking points of a lie is a pretty simple task if you have "useful idiots" willing to parrot them and no conscious to restrain you, Mr. Messenger seems to have all the tools necessary in order to advance in his chosen field.


If you wish to read more about the Inca mummies and a real scientist check this out High-altitude anthropologist
Posted by Jer at 9:54 PM