Exaggerating the impact of climate change on the spread of malaria

This deception also results in the misappropriation of resources not to mention the crime of environmentalist curbing the one known check on this scourge DDT. I've said it before, that when the full scope of this scientific abortion called AGW is fully revealed and the unnecessary pain and waste it has caused there will be hell to pay. Imagine if all the money spent on trying to prove a lie was actually spent on helping the poor of the world with real and proven solutions. The money spent on new computers and modelling to justify the lie probably could have cured malaria in Kenya. 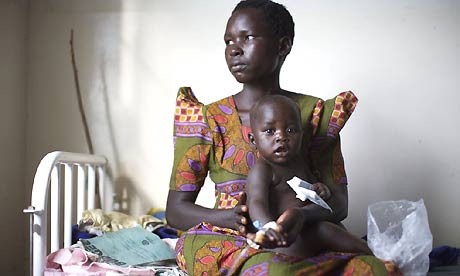 A recent press release from the UK Department for International Development (DFID) suggested that millions more people in Kenya are susceptible to malaria as a result of mosquitoes colonising higher ground as global temperatures rise. ('New evidence of a link between climate change and malaria', 30.12.09 – see below). The press release was extensively covered in UK newspapers and elsewhere.

Simple analysis shows that the claims of the press release are almost entirely without foundation. The battle against the severe threat from climate change is impeded, not helped, by government departments issuing alarmist and exaggerated alerts based on poor science.

All other things being equal, the spread of malaria is probably encouraged by higher global temperatures. The malaria parasite in the insect's body grows fastest at average daily temperatures of about 25 degrees and most parts of the world are well below this level. But temperature is only one factor in the spread of this terrible disease, possibly a small one. The presence of stagnant water in open sunlit fields after deforestation, increased population pressure, lack of availability of mosquito nets, or a reluctance to use them, may all contribute as much to the spread of malaria as increasing temperatures. Nevertheless, despite the plethora of more convincing explanations for varying levels of malarial illness, policy-makers and government departments continue to state, without any qualification, that malaria will become very much more prevalent in a warmer world.

The 2001 IPCC report also overstated the connection between climate change and malarial infections. Understandably, the top selling books by climate sceptics published in the last few years all feast on the weak scientific evidence for this assertion. These books usually quote the specialist in insect-borne diseases, Professor Paul Reiter of the Pasteur Institute in Paris, who has strenuously and effectively attacked the idea that increasing temperatures will necessarily produce a rapid rise in the incidence of insect-borne diseases. Professor Reiter points out that malaria transmission is a complex matter and that rising temperatures are only weakly linked to an increasing incidence of malaria. (The illustration at the head of this article provides us with some sense of just how complex malaria is). Why, he and others have asked, if temperature is so important, did the disease disappear from countries like Britain just as the climate was warming at the end of the 'Little Ice Age' during the 18th and 19th centuries?

However the story that substantial increases in malaria will inevitably follow rising temperatures will not go away and DFID's recent press release is another example. The document claims that 'new research' in the highland areas around Mt Kenya has shown strong links between increasing temperatures and malaria incidence. When I asked for a copy of the scientific papers to back up this assertion, DFID said it was unable to provide this 'new research', stating instead that the press release was based on 'a cumulation of several studies over the past few years'.

Three papers were attached to this surprising response from DFID. The press release asserted that temperatures on the western side of Mt Kenya had risen two degrees Celsius in twenty years, prompting epidemics of malaria, but these research papers actually showed a much smaller increase. The specific claim that the Mt Kenya area has recently become vulnerable to malaria was backed up by interview data of a few years ago from a small number of families who declared a total of eight cases of malaria in the past five years compared to only three in the period of five to ten years ago. No medical analysis appears to have been carried out to determine whether the disease recorded was or was not malaria. Neither was any attempt apparently made to adjust for deficiencies in memory of events ten years ago.

What about the physical evidence of mosquitoes? The scientific papers sent to me by DFID write of finding a total of two mosquito larvae in pools on high ground near Mt Kenya. These larvae produced a total of 23 insects when incubated in a laboratory. The quality of this finding is never questioned. Most importantly, the background research papers do fully acknowledge that other events in the geographic areas under study, such as deforestation or increased pooling of stagnant water as a result of land use changes, could well have been the primary cause of any growth in the number of mosquitos and of malaria, not climate change. But these possibilities are unmentioned in the DFID press release.

A line-by-line analysis of the press release is provided below. It suggests that almost all the assertions in the DFID document are unsupported by any evidence or are downright wrong. Malaria may indeed be increasing in highland areas of Kenya but the evidence that the disease is driven by rapid climate change is completely unsupported. The research used by DFID and sent to me actually states that changes in land use may be the key factors in encouraging the growth of this extremely unpleasant disease.

The climate sceptics often claim that the political establishment routinely exaggerates the effects of increasing temperatures. These sceptics say that very poor scientific evidence is used to create alarmist headlines about the impact of global warming. The DFID press release is a clear candidate for criticism of this type. It has used inadequate scientific research as the basis for an unqualified conclusion about the impact of climate change on insect-borne diseases. In this case, the press release goes even further by misstating many of the elements of the research on which it is based. Such abuse of science does substantial disservice to the attempt to energise the global community to take action to mitigate climate change.
(With many thanks to Professor Paul Reiter for his comments during the preparation of this article. Errors are my responsibility. If you are interested in reading more about the causes of malarial infections, please consult one of Professor Reiter's papers)