Naturalism Has Been Hijacked
Man is not a cancer on the planet.

Mankind has really been put in its place over the past 500 years. Why only the other day, back in 1400, the sun orbited the earth; man was God's consummate work of art; humans were masters of themselves and the domain God provided for them.

Our secular fall from grace began with Copernicus, who dislodged the world from its celestial catbird seat. Later, Darwin established that man, far from being the animal kingdom's pièce de résistance, was a bit like a baboon in clothes. Then Mendel documented the laws of inheritance -- so much for free will -- and Freud subordinated what was then left of our minds to unseemly drives over which we have little control.

In the 20th century, technology assumed a size and complexity too big to fit into what was left of our brains. In the 1890s, an intelligent layman could achieve a rudimentary grasp of the scope of current scientific thought. Perhaps no one -- scientist or not -- fathoms the full scope of technology today.

According to scientist and futurist Raymond Kurzweil, the coming technological-evolutionary quantum leap, known as the Singularity, will erase the line between human beings and technology. He maintains that technology's exponential progress will result in part-human, part-machine beings with infinitely greater brain power and life-spans approaching immortality. 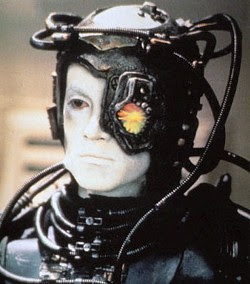 Mr. Kurzweil envisions the time, if a body part fails, one need only grab its replacement from the pantry and snap it in place. Already, lawyers are busy devising the constitutional framework for a post-human future, in view of the shifting nature of what comprises a human being. The classic paradox comes to mind: Once the knife's blade and handle are each replaced several times, is it still the same knife? Once all your parts have been replaced a few times, are you still you?

Now a segment of the Green movement presents a fresh challenge to mankind's place within nature. Humans, the thinking goes, are one species among the many, a life form coexisting with others, our rights commensurate with those of snail darters, mosquitoes and coral reefs.

The new environmentalist thinking occupies that treacherous terrain between rationality and romanticism. It's highly logical, too, an all-encompassing equation where everything is equivalent to everything else -- communism at a cellular level.

The premise glows with the innocence we forsook when Adam larcenously appropriated an apple from its rightful owner, the tree.

This dangerous new unnatural naturalism sees the planet as a realm of halcyon purity. Conversely, mankind is portrayed as a cancer on the planet. Welcome to secular subhumanism.

The Earth-Firsters are not fools. There are choice elements in their deranged philosophy that merit consideration; such is the essence of temptation. However, their failure is that they undermine their cause with acts of brutality. Theodore Kaczynski, the Unabomber, a Ph.D. with kindred neo-Luddite views, was one such activist run amok, responsible for dozens of injuries and four deaths. He is a case study of how, contaminated with extreme emotion, logic becomes toxic.

Self-described "evo-lutionaries" and animal-rights activists feel justified in spiking trees, burning down housing developments, vandalizing laboratories and threatening the lives of researchers and their families. By all means save the Red-Cockaded Woodpecker, but not at the cost of human lives, no matter how few. That way lies madness.

One activist author posits that the planet can support only one billion people -- a number surely including the writer, his friends and extended family. Another activist advocates saving the world through euthanasia, abortion, suicide and sodomy. However, the truly repugnant part of this story is that these are both tenured professors in wealthy universities.

In Switzerland, proposed legislation protects the rights of plants. As you roam the Swiss mountains, do not violate the rights of the wildflowers by picking them: An undercover gnome might arrest you. Internationally, the greener-than-thou brigade scorns bioengineered seeds -- the 20th century achievement that vastly increased the world's food supply and rescued billions from starvation -- forgetting that nature has been creating hybrids since the beginning of time.

A Yale professor maintains that owning pets is a kind of species colonialism, an exploitative master-subject relationship. The word "pet" is now viewed as pejorative; if you must hold a creature hostage, call it your "animal companion."

The political views of the Eco-elitists defy easy categorization, if not also comprehension. Their anti-business stance might mark them as liberals, while their hard-edged fundamentalist views about nature and brittle nostalgia for a lost Peaceable Kingdom are surely conservative.

Perhaps they are little more than one of nature's newest 21st century hybrids: Progressive-Reactionaries.