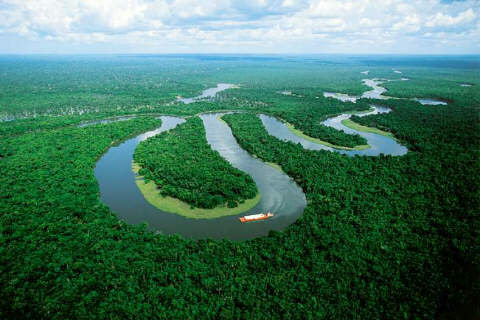 People who have payed attention to the alarmist narrative of global warming are seldom surprised when yesterday's apocalyptic predictions are suddenly transformed into today's far less dire scientific study, usually found on the back page.

This pattern of shouted alarm morphing into ho hum is becoming so common it is a wonder that the climate community doesn't just close up shop in shame and embarrassment. But the hubris necessary to actually perpetrate such a false narrative is such that they simply change the theory to fit current climatic conditions.

A recent example of an alarmist narrative suddenly wiped away with little notice has to do with the Amazon. Reuters brings us the good news that


The Amazon rainforest is less vulnerable to die off because of global warming than widely believed because the greenhouse gas carbon dioxide also acts as an airborne fertilizer, a study showed on Wednesday.

The boost to growth from CO2, the main gas from burning fossil fuels blamed for causing climate change, was likely to exceed damaging effects of rising temperatures this century such as drought, it said.

The fact that CO2 is a "plant fertilizer" seems to be a new realization to the wizards of smart who have been keeping the world on edge these past couple of decades as they cash their tax payer funded checks. After years of demonetization of CO2. Reuters felt compelled to reluctantly and briefly explain that yes carbon dioxide actually does play a very significant and beneficial role in nature, as anyone over thirty years old remembers from their grade school science class, though who knows what is taught today.


Plants soak up carbon dioxide from the atmosphere and use it as an ingredient to grow leaves, branches and roots.

This grade school biology has finally made its way into the calculations of climate scientist and they have now issued a reprieve for the world's largest rain forest. Not only that but we are being informed, again reluctantly, that CO2 far from being a negative to the Amazon is actually a net positive.


It estimated that the damaging effects of warming would cause the release of 53 billion tons of carbon stored in lands throughout the tropics, much of it in the Amazon, for every single degree Celsius (1.8F) of temperature rise.

The benefits of CO2 fertilization exceeded those losses in most scenarios, which ranged up to a 319 billion ton net gain of stored carbon over the 21st century. About 500 to 1,000 billion ton of carbon are stored in land in the tropics.

As if increased heat would not also be beneficial to plant growth....in a jungle environment. Oh well we will take what we can get from the scientific community, they have such a hard time admitting what to most people is common sense.


"I am no longer so worried about a catastrophic die-back due to CO2-induced climate change," Professor Peter Cox of the University of Exeter in England told Reuters of the study he led in the journal Nature. "In that sense it's good news."

Gee thanks Prof, we were really worried about it, especially after you and your peers put out stories like this just four short years ago.


"Amazon could shrink by 85% due to climate change, scientists say"

Global warming will wreck attempts to save the Amazon rainforest, according to a devastating new study which predicts that one-third of its trees will be killed by even modest temperature rises.

I guess these scientist did not take grade school science and did not know about the whole "plant fertilizer" properties of the demon gas carbon dioxide. They were all to worried about CO2 induced warming killing off the Amazon and made sure that as the Reuters article pointed out that the "die off because of global warming ...[is] widely believed."

And why is the Amazon rain forest die off so widely believed? From the 2009 Guardian article


Chris Jones, who led the research, told the conference: "A temperature rise of anything over 1C commits you to some future loss of Amazon forest. Even the commonly quoted 2C target already commits us to 20-40% loss. On any kind of pragmatic timescale, I think we should see loss of the Amazon forest as irreversible."

You got that? One of the hottest most humid environments on Earth was going to be "irreversibly lost" due to global warming. Even 1C rise in temperature was predicted to reek havoc on our South American jungles.

It is a good thing that good old Professor Cox came along and set them straight. Oh wait what is this ? From the Guardian story just four short years ago.


Peter Cox, professor of climate system dynamics at the University of Exeter, said the effects would be felt around the world. "Ecologically it would be a catastrophe and it would be taking a huge chance with our own climate. The tropics are drivers of the world's weather systems and killing the Amazon is likely to change them forever. We don't know exactly what would happen but we could expect more extreme weather." Massive Amazon loss would also amplify global warming "significantly" he said.

So the reason people believe that global warming is going to destroy the Amazon and create a global "ecological catastrophe" is because that is precisely what Peter Cox was telling the world four years ago.

Of course the good professor and his like minded peers would simply say that recent scientific studies have superseded their previous conclusions. Of course the whole tenor of these people is like kids who set off fire crackers in a crowded theater then after the panic has created mayhem point out that they are innocent because after all it was not a real machine gun .

But science or truth was not the purpose in the first place was it? If you think about it, the scientific knowledge to reach the conclusion they reached in 2009 as opposed to what they know today is not that much different. As a matter of fact the only thing that changed is the data they put into their models.


The scientists said the study was a step forward because it used models comparing forest growth with variations in the rising levels of carbon dioxide in the atmosphere.

So all that they did different in this study was factor in forest growth as a result of increased CO2, which leads one to believe that they did not previously factor this into their models.

In other words the previous catastrophic model scenarios were based on the warmer temperatures that CO2 is believed to cause without determining what effect that same CO2 would have on plant growth which every scientist knows CO2 generates, (we would hope)

This, in a nutshell, is exactly how modern science operates when it comes to "climate change". Look for and factor in only the negative impacts while ignoring or hiding the positive and limiting factors in order to promote worse case scenarios thus creating alarm. Then as with this new Amazon study, when the truth can no longer be hidden, quietly and without shame, tell the truth.

But the damage is done, the agenda has been pushed "Forward", the narrative has been established  our children have been indoctrinated and the lie has circled the globe for four years before the truth has even put on its shoes.

Thank you Professor Peter Cox for being case study in climate change alarmism.
Posted by Jer at 10:45 PM