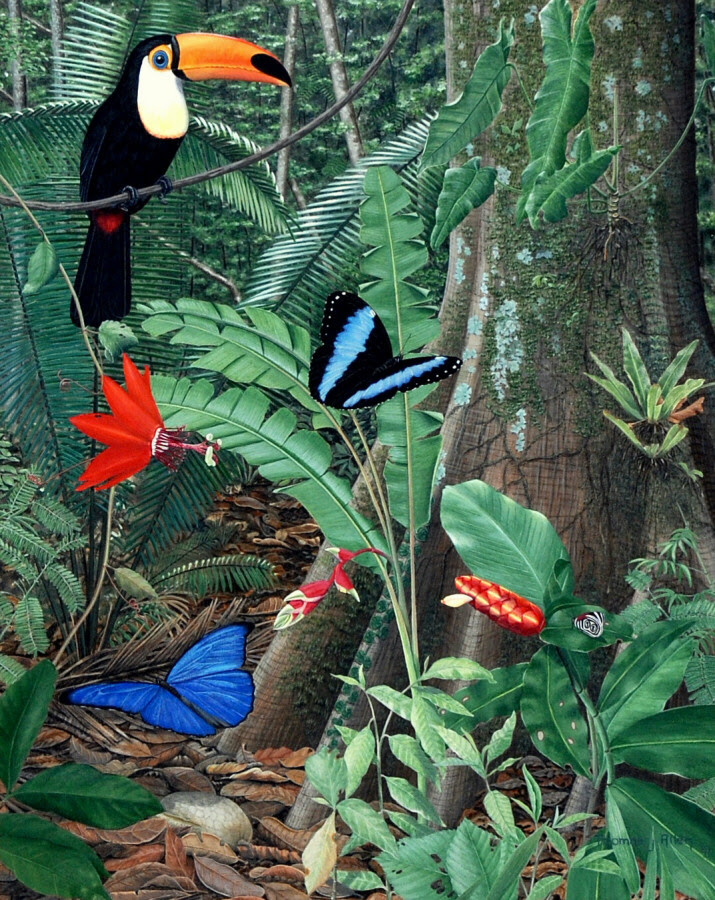 This article in the Daily Mail -H/T Climate Depot, further illustrate the absolute complete lack of common sense (not to mention the lack of scientific and journalistic integrity) that the global warming debate continues to inhabit. Let's Look at the article.

The threat to tropical rainforests from climate change may have been exaggerated by environmentalists, according to a new study.

They believe that a wetter, warmer future may actually boost plants and animals living the tropics.

Researchers have shown that the world's tropical forests thrived in the far distant past when temperatures were 3 to 5C warmer than today.

Researchers at the Smithsonian Tropical Research Institute in Panama examined pollen trapped in rocks in Colombia and Venezuela before, during and after the PETM.

They found that the amount of plant-life in the forests increased rapidly during the warming event with new plant species evolving much more quickly than the older species became extinct.

What? plant life increased and evolved quicker in hotter climates! Stop the presses, the world is not coming to an end!

Pollen from the chocolate family and passionflower plant family were found for the first time.
The extreme warm spell - called the Paleocene-Eocene Thermal Maximum - saw global temperatures soar by 6C (11F) within a few thousand years.

The cause of the PETM is unknown.....

But the unknown doesn't fit the narrative now does it?

... However, some scientists believe it was triggered by the release of vast amounts of carbon dioxide from volcanic activity over a few thousand years.

Ah we knew our intrepid scientist couldn't let this get too far off the narrative, even if they don't know, so of course they choose to hypothesize out of thin air, excuse the pun- that it was caused by carbon dioxide. Wow what a surprise. But here is where we go from the typical dumb to the dishonest.

The injection of carbon dioxide into the atmosphere set off a spiral of events that warmed the climate and led to even more greenhouse gas entering the atmosphere, they say.

Now let's think real hard here, what is the excuse so often given by our climate science community of why global temperatures would not increase as expected? What is the natural event that these wizards of deception always point to as a mitigating factor that would over ride the demon CO2? Why of course we all know it is large volcanic explosions! In fact there is a great deal of scientific chatter about this a couple of examples;


Global Cooling After the Eruption of Mount Pinatubo: A Test of Climate Feedback by Water Vapor

And you got to love this little note from an article which has a section called  EXAMPLES OF GLOBAL COOLING IN THE AFTERMATH OF HISTORIC ERUPTIONS:


PINATUBO (1991) -- Mt. Pinatubo erupted in the Philippines on June 15, 1991, and one month later Mt. Hudson in southern Chile also erupted. The Pinatubo eruption produced the largest sulfur oxide cloud this century. The combined aerosol plume of Mt. Pinatubo and Mt. Hudson diffused around the globe in a matter of months. The data collected after these eruptions show that mean world temperatures decreased by about 1 degree Centigrade over the subsequent two years. This cooling effect was welcomed by many scientists who saw it as a counter-balance to global warming.

So volcanoes cool the atmosphere today but during the ancient PTM period, they warmed it, got it? Let's carry on to the bitter end of this article

The researchers believe the hotter, wetter conditions - and additional carbon dioxide in the atmosphere - boosted plant-life and increased biodiversity.

What is this sacrilege, additional carbon dioxide boosts biodiversity! Say it ain't so, this is too good to be true, a hotter wetter carbon dioxide rich world is good for life! They must be pulling our chain, this can't be!

The findings could shed light on man-made global warming caused by the release of carbon dioxide from burning coal and destroying forests.

Wait a minute, what just happened? I thought global warming and carbon dioxide was...was good for plant life and now it's destroying forests. Let's read those two paragraphs together again.

The researchers believe the hotter, wetter conditions - and additional carbon dioxide in the atmosphere (go that?) - boosted plant-life and increased biodiversity (got that?) So what do they derive from this?...The findings could shed light on man-made global warming caused by the release of carbon dioxide from burning coal and destroying forests.

'It is remarkable that there is so much concern about the effects of greenhouse conditions on tropical forests,' said Dr Klaus Winter of the institute.

Conservative computer models of climate change suggest the world will warm by at least 2C over the next century.

The computer models may be conservative, but the people feeding them sure ain't..sorry

'However, these horror scenarios probably have some validity if increased temperatures lead to more frequent or more severe drought as some of the current predictions for similar scenarios suggest."

British forest expert Dr Simon Lewis of Leeds University said warmer, wetter weather could boost rain-forests. However, if climate change led to more droughts, it could be disastrous for regions like the Amazon.

Well of course we have to throw in the "if climate change led to more droughts" what's a good horror or is it whore....never mind what is a good scenario without a bunch of ifs.

In the last five years, the Amazon has experienced two 'one in a century' droughts, he said.

'The 2005 Amazon drought was widely characterised as an unusual 1-in-100 year event, which caused tree deaths leading to rotting trees releasing over four billion tonnes of carbon dioxide,' he said.

'And now in 2010, another drought has stuck, which initial analyses show is more extensive than 2005, even though it is only five years later.

'These droughts are consistent with model projections showing a die-back of the Amazon, further accelerating climate change in a dangerous loop.

So why are you writing this story ? The study  found that in the past real world "hotter, wetter conditions - and additional carbon dioxide in the atmosphere - boosted plant-life and increased biodiversity" what is the point if your models are so much superior to the historical record why even bother?

'The new paper is useful, but doesn’t address present-day concerns of drought-impacts that affect the forest itself and the millions of people who live there.'

Ah that's it, it's just about explaining away the reality of the world and the study so that the narrative can stay intact. Good job duh...dumb...dishonest-David Derbyshire