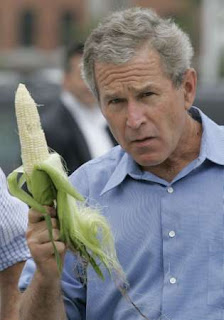 Republicans talk about ending wasteful government intervention. Congressional Democrats say they want to protect the environment. And Barack Obama claims he's looking for bipartisan cooperation and reform. All of these goals would be served by rolling back ethanol subsidies.

"A Republican takeover of the House of Representatives," Bloomberg News speculated this week, "may mean that U.S. subsidies aiding ethanol producers will be cut after the party pledged to reduce government spending."

We'll find out within months if that's putting too much stake in GOP rhetoric.

Ethanol fuel (especially ethanol distilled from corn) is subsidized in dozens of ways by governments at all levels. Two of the longest-running subsidies -- a 54-cent-per-gallon tariff on imported ethanol, and 45-cent tax credit for every gallon blended with gasoline -- expire on Dec. 31, making them a top priority for industry lobbyists during the lame-duck session.

The options facing Congress are (a) extend both subsidies for a long period, such as five years, (b) extend them until next year, and then take up some sort of reform, or (c) do nothing and let them expire. If Republicans were serious about their expressed belief in the free market and opposition to subsidies, they would let the subsidies die this year or next. If Democrats were truly concerned about the environment and want to end corporate welfare for big oil, they would, too.

In recent years, Americans have learned about the downsides of ethanol subsidies. The 2005 and 2007 energy bills mandated the use of ethanol, igniting a corn boom, which crowded out other crops, contributing to spikes in food prices. Ethanol was even blamed for tortilla riots in Mexico.

Growing and distilling ethanol uses immense amounts water (contributing to river and aquifer depletion) and energy (some scientists argue that more energy goes into making a gallon of ethanol than is contained in that gallon). The added corn demand means more fertilizer production and use, adding to harmful runoff, which is blamed for "dead zones" in the Gulf of Mexico that choke out aquatic life.

There are plenty of policy reasons to kill ethanol subsidies, but historically, a powerful lobby has kept them alive. And while the GOP talks about free markets, Republican lawmakers are cozier with the ethanol lobby than Democrats are. Republicans raised more than Democrats from Poet, the nation's largest ethanol maker. Former Republican Rep. Jim Nussle of Iowa is now the president of Growth Energy, a leading pro-ethanol lobby.

Recently, however, academics such as Cornell professor Harry de Gorter have put forward a more potent argument for abolishing the tax credit: The tax credit only subsidizes gasoline consumption.

Start with this statement by the Congressional Budget Office: "In the future, the scheduled rise in mandated volumes would require the production of biofuels in amounts that are probably beyond what the market would produce even if the effects of the tax credits were included."

For this reason, the ethanol industry is actually divided over the tax credit. They would prefer a producer tax credit and other new ethanol subsidies to replace the current ones.

The free-market philosophy expounded by Republicans argues for letting the tax cuts expire, and not creating any new carveouts or handouts -- eventually abolishing the costly mandates. The lobbyist connections and campaign cash, however, will pull the GOP toward continuing subsidies.

So ethanol becomes a good test for the supposedly reborn Republican Party in both the lame-duck and the 112th Congress. Republicans this year could demand a six-month extension of current policy, and next year, with control of the House, simply kill the tariff and tax credit.

The downsides of ethanol are so clear, and the environmental benefits so dubious, that it's hard to attribute support for the subsidies -- especially by people preaching the free-market gospel -- to anything but obeisance to special interests.

Now we get a chance to see what motivates the GOP