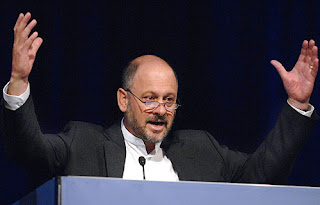 
The global warming movement is in heavy retreat in every Western country. But, as we have learned from the rise of leftist leaders like President Obama and Australia's Prime Minister Kevin Rudd, modern collectivists are resilient. If they can recover from the collapse of Communism, they can certainly rebuild the environmental movement. Now is not the time to celebrate, but to press home the exposure of their bogus claims and hidden interests.


TIA Daily readers will therefore appreciate the uncompromising interview style of Australian journalist Andrew Bolt as he eviscerates one of the world's leading warming alarmists, Tim Flannery-a man in the mold of Al Gore. The interview took place on radio in Melbourne, Australia on June 9.

Andrew Bolt has given TIA Daily permission to reproduce the interview in full.

The debate begins with Bolt asking Flannery about his disillusionment with the Australian government over its ditching of Cap and Trade:


Flannery: I'm unlikely to vote for him [Rudd] because my trust has been eroded away.... He promised to deliver an emissions trading scheme and he's then withdrawn that with very little justification....


Bolt: He said he wouldn't move now until the rest of the world did something which is a direct repudiation of what he said before. But, Tim, part of the reason, of course, that he's backed down is that there's been a great swing in sentiment against this kind of thing, there's a rising tide of skepticism. How much are you to blame for some of that?


Flannery : There is some swing in sentiment. And I think it's very hard to maintain any issue with that sort of very high level of support for a long time. So there's some, but what is happening around the world should give us all heart. We've seen China now pledged to reduce is emissions intensity by over 40 per cent.


Bolt: It's still going to build a coal-fired power station every week or so.


Flannery: And what that is going to do if that's achieved by 2020 is put us on track to avoid dangerous climate change. But for us to do that, places like Australia and the US, the wooden spooners in this debate, actually have to do their part.


Bolt: But, Tim, I'm just wondering, there has been a rise in skepticism. That's precisely why the Liberals [the Australian Liberal party is closer to the classical pro-free market 19th-century meaning of that term rather than its modern sense], for example, have switched from supporting an ETS to opposing it...and they dumped their leader over it. Now I'm wondering to what extent are you to blame for rising skepticism about some of the more alarming claims about global warming.


Flannery : Well, many of the things that scientists highlight may happen are very alarming. They're not alarmist but they are worrisome. Rises in sea-levels, for instance, are a significant issue.


Bolt: Well, let's go through some of your own claims. You said, for example, that Adelaide may run out of water by early 2009. Their reservoirs are half full now. You said Brisbane would probably run out of water by 2009. They are now 97 per cent full. And Sydney could be dry as early as 2007. Their reservoirs are also more than half full. How can you get away with all these claims?


Flannery: And thankfully, Andrew, governments have taken that to heart and been building some desalination capacity such as in Perth.


Bolt: Only in Perth.


Flannery: No, there's plans in every capital city.


Bolt: No, no, no, you said Brisbane would run out of water possibly by as early as 2009. There's no desalination plant, there's no dam.


Flannery: What I have said is that there is a water problem. They may run out of water. And ...


Flannery: That's a lie, Andrew. I didn't say it would run out of water. I don't have a crystal ball in front of me. I said Brisbane has a water problem.


Bolt: I'll quote your own words: "Water supplies are so low they need desalinated water urgently, possibly in as little as 18 months." That was, on the timeline you gave, by the beginning of 2009. Their reservoirs are now 97 per cent full.


Flannery: Yeah, sure. There's variability in rainfall. They still need a desal plant.


Bolt: You also warned that Perth would be the 21 century's first ghost metropolis.


Flannery: Because at that stage there had been no flows into that water catchment for a year and the water engineers were terrified.


Bolt: Have you seen the water catchment levels here, see, they're tracking above the five year level. I'm showing you now.


Flannery: You know what I came in here to talk about, Andrew, here? It's our farm day we're doing with our Deakin lecture series in Bendigo, at the Bendigo town hall today. And it's a really exciting event...

Andrew: All that's lovely, Tim. But I think you need to be held to account for the alarmism that is in part your stock in trade, your shtick, and is responsible for what you now see-the retreat from global warming policies.


Flannery: You want to paint me as an alarmist.


Bolt: You are an alarmist.


Bolt: I'm asking you to defend these quotes.

Bolt: You said the Arctic could be ice free two years ago. [Actually, last year.]


[The show host, Steve Price interrupts, and they argue over the questioning.]

Bolt: I'm asking Tim whether he repents from all these allegations about cities running out of water, cities turning into ghost cities, sea level rises up to an eight-story-high building. Don't you think that is in part why people have got more skeptical?


Flannery: I don't, actually, because some of those things are possibilities in the future if we continue polluting as we do. And we've already seen impacts in southern Australia on all of those cities. Everyone remembers the water restrictions and so forth. Just because we get a good, wet year doesn't mean we should forget about the problem. We actually have to deal with this long term drying trend and that means securing our water supply.


Bolt: You warn about sea level rises up to an eight-story building. How soon will that happen?

Flannery: Asking that question is it's a bit like asking a stock analyst when the next stock market crash is going to happen and how big it's going to be. No one can. We can all see the underlying weakness in the market in the months before the crash.


Flannery: Could be thousands of years.


Bolt: Tens of thousands of years?


Flannery: Could be hundreds of years.


Flannery: It could be hundreds of years. The thermo- dynamics of ice sheets are very, very difficult to predict, but what we do know when we look back is the fossil record is that when the world is a degree or two warmer than it is now seal levels rise very significantly-between four and 14 meters above where they are. We can't say how long it takes for that rise to happen because the fossil record just isn't good enough, it isn't accurate enough...


Bolt: Should we also have nuclear power plants?

Flannery: In Australia I don't think so. We've got such a great load of assets in the renewable area that I don't think there's an argument here that they are ever going to be economic.


Bolt: Four years ago you did. What changed your mind?


Flannery: No, I never did. I've always had the same argument.

Bolt: No, no, no. Here's your quote: "Over the next two decades Australians could use nuclear power to replace all our coal-fired power plants. We would then have a power infrastructure like France and in doing so we would have done something great for the world." That was your quote.


Flannery: I don't recall saying that at all.


Bolt: That's the point, you know, you make these claims and when people confront you, you walk away from them.


Flannery: But that was about "may." No, no, you said "may." And Australia may be able to do that. It's not what I recommend and I never have recommended it. But what I do say...


Bolt: "We would have done something great for the world."


Flannery: But what I do say, nuclear power, right, getting away from coal would be great for the world. Why should we take the most expensive option in this country, which has always been recognized as having the most expensive and difficult option. We are going to see a whole lot of other technologies and innovations which are now well under way which we could use instead of nuclear power.


Flannery: Yeah, I am. Indeed.

Bolt: How come you don't declare that.


Bolt: You just did because I told you. You said that geothermal, which you are an investor of, you've got a plant, you've invested in a plant in Innamincka and you said the technology was really easy. How come that plant...

Flannery: Not really that easy.

Bolt: Well, yes. It's actually had technological difficulties and it's been delayed two years because it's not that easy, after all, is it?

Flannery: Well, any new technology is going to be difficult to bring to fruition. It's a bit like generation for nuclear. There's challenges all the way. But in terms of geothermal there are many places in the world where you can actually drill down and get into a hot rock body such as...

Price: Andrew, we're going to have to go.