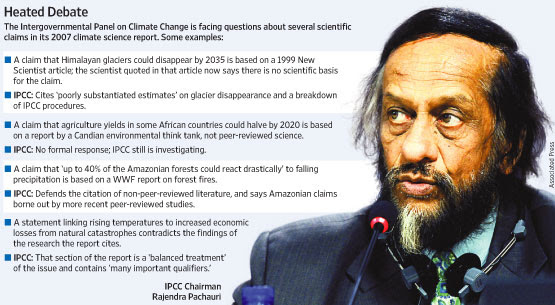 Some IPCC Officials Say the U.N.-Sponsored Group Must Improve Procedures for Reviewing Reports

By JEFFREY BALL And KEITH JOHNSON

Some top officials of a Nobel Prize-winning climate-science organization are acknowledging the panel made some mistakes amid a string of recent revelations questioning the accuracy of some of the information in its influential reports.

Officials of the Intergovernmental Panel on Climate Change, a United Nations-sponsored network of scientists whose reports strongly influence global policy on greenhouse-gas emissions, initially played down some of the allegations and criticized those who called them important. Increasingly, however, they are acknowledging the panel's mistakes and saying it needs to tighten its procedures.

"This has not increased the credibility of the IPCC," said Ottmar Edenhofer, a German economist who is co-chairing one of the main sections of the IPCC's next big climate-change report, due out in 2013 and 2014. "There is some room for improvement."

Scientists and other experts involved in the IPCC say most of the information assembled and reported by the organization is valid. They say the revelations don't impugn the IPCC's main conclusions: that climate change is largely due to man-made greenhouse-gas emissions and that it could have dangerous consequences. But though they say each revelation itself is small, they worry that the continuing string of them is damaging the IPCC's credibility—not just with experts who question the premise of human-induced climate change, but with the public at large.

In citing climate change as an important issue, a U.N. conference in December in Copenhagen didn't rely "on the precise date of the demise of Himalayan glaciers, or African agriculture" to tackle global warming, says Jean-Pascal van Ypersele, vice chairman of the IPCC and a professor at the Institut d'Astronomie et de Géophysique Georges Lemaître at the Université Catholique de Louvain in Belgium, mentioning subjects that have generated criticism of the IPCC. "It's the body of evidence" in the whole report that makes the case for action to curb emissions, he says.

That officials with the IPCC are on the defensive is a big turnabout from 2007, when the then-obscure U.N. organization shared a Nobel Peace Prize with former U.S. Vice President Al Gore. The IPCC got the prize for its 2007 report concluding that climate change is "unequivocal" and is "very likely" caused by man. The report motivated countries around the world, including the U.S., to push for limits on greenhouse-gas emissions.

But recent revelations have undercut the Geneva-based organization. Among them: Emails were released on the Internet in which leading scientists at an influential U.K. climate-science institute seemed to squelch dissent from researchers who disagreed with them; the 2007 report incorrectly said that Himalayan glaciers could disappear as soon as 2035; and it was revealed that scientists hadn't peer-reviewed a claim in the 2007 report that climate change would halve African agricultural yields by 2020.

Thousands of scientists and other experts volunteer their time with the IPCC to issue joint pronouncements every five or six years about one of the most complex scientific fields. The group, established by the U.N. Environment Program and the U.N.'s World Meteorological Organization, is administered by a paid staff of only a few dozen people and doesn't do any scientific research itself; its job is to assess work done by others, providing information for policy makers.

Experts involved in writing IPCC reports say the 2007 document's errors point up gaps in the organization's checks and balances. "They are not big mistakes," said Mr. Edenhofer, who is deputy director of the Potsdam Institute for Climate Research in Germany. But, he added, "We have to think about the procedures again." In particular, he, said, IPCC reports have to be more careful about noting the uncertainties surrounding information that hasn't been subjected to peer reviewamong scientists.

The most glaring mistake in the 2007 report is the claim that Himalayan glaciers could disappear by 2035, several IPCC authors say. That claim wasn't based on any peer-reviewed scientific paper, but on a decade-old interview given by an Indian glacier expert. Some within the IPCC suggest the mistake may be a typo traced back to a 1996 U.N.-sponsored study—which also wasn't peer-reviewed—that said the glaciers would disappear by 2350.

Chris Field, co-chair of another section of the IPCC's next big report and director of the department of global ecology at the Carnegie Institution for Science in Palo Alto, Calif., said he thinks the IPCC would have caught the error had the team of scientists writing the report chapter on the Himalayas included a glacier expert. It didn't.

"The issue with the Himalayan glaciers really represents something where the procedures fell through," Mr. Field said. He added: "The challenge is the whole enterprise is working on volunteer labor."

Last year, before the disclosure of the Himalayan mistake, IPCC officials decided on a procedural change that might make it more likely that such a mistake would be detected in the future, Mr. Edenhofer said. Each big report consists of three parts, and the IPCC will allow more time between the publication of each of part, so the authors of one part will be likelier to read the others and flag errors.

Some people involved with the IPCC said they saw no reason why Mr. Pachauri should go. "He's dedicated an amazing amount of time and commitment and intellectual energy to the IPCC," said Mr. Field.

U.S. officials said they don't believe revelations of mistakes in IPCC reports undermine cause for concern about global warming. "It's not useful when mistakes are made, but the overwhelming body of evidence [on climate change] is not disturbed by those events," Todd Stern, the Obama administration's top international negotiator on climate-change policy, told an audience Tuesday at the Center for American Progress, a left-leaning Washington think tank. "It's nothing short of crazy for us to put our heads in the sand and do nothing" about climate change.

Governments, including the U.S.'s, are now soliciting applicants to help write the IPCC's next climate-change report. Robert Marlay, deputy director of the U.S. Department of Energy's office of climate change policy and technology, who is involved in the solicitation process, says that more people are expressing interest than in prior years. The recent revelations "do not change any of the core conclusions from prior IPCC reports," he said in an email Tuesday, "but they do underscore the importance of getting strong, science-based researchers involved in the process, keeping an open but critically challenging mind, and grounding conclusions in peer-reviewed literature."